skip to main | skip to sidebar

Welcome to my Blog!

I am Lisa Bluhm Mrs. Pacific Northwest 2010-2011. I am competing in March for the title of Mrs. Washington. The Mrs. Washington Pageant is about making a difference. As a contestant I volunteer my time and talents to serve charities and organizations. I am also an active participant in my community. I am passionate about many different organizations and leave myself open to be able to support or participate in as many as I can.
My platform is called "Unlock Your Potential". It has always been my passion to inspire and encourage others to discover their goals or dreams and then teach them the steps to achieve success. When I hear people say I could never do that, I am not talented or anything that is negative towards their capabilities I feel called to action to help them see they have the potential to do or be anything they want to be. It may not be the same goals or dreams someone else has but their own personal challenges that lie within them. Once they realize they have the potential and they can achieve their dreams they are on their way to achieving success in their life. It can be as simple as getting their house organized or running a marathon. I am able to use my personal experiences in trials and triumphs as examples to encourage and inspire them on their journey. Throughout the year I will be featuring different peoples stories and sharing how they have unlocked their potential. Will you be one of them? Contact me with your story I would love to hear about it!
It is my desire to be Mrs. Washington so that I may represent the married women of our state. I consider it an honor and a responsibility. I take this role seriously. With my 22 years of marriage and a lifetime of experiences I am ready to continue fulfilling my role as a leader and a mentor. As Mrs. Washington I will have the opportunity to reach out to even more people in our state sharing my platform and have more opportunities to volunteer and bring awareness to non profit organizations that make our state so great.
I have unlocked my own potential in many areas of my life. Competing in marathons and triathalons, leading women's groups, leading children's groups, coaching teams and starting my own business. After being a stay at home mom for several years I took my passion for creating soldered art and shared it with others. My company Simply Swank llc was born! I developed my own technique and product line that is now sold in stores globally. I am also the author of Simple Soldered Jewelry and Accessories, the host and instructor of Simply Solder DVD and am currently writing a new book. 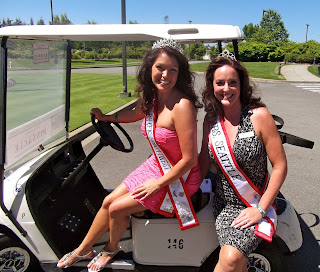 What a beautiful day at the Snoqualmie Ridge golf course! We had a great turn out and everyone had so much fun. It was so well run I didn't feel overworked at all!! Everything ran so smoothly. We set up signs and silent auction items, registered golfers, and helped out with whatever was needed. This event raised over $30,000 for Gliblastoma Brain Cancer research and support.
Mrs. Washington Carla Richards even played on one of the teams with actress Stephanie Zimbalist. Stephanie said Carla was an awesome golfer! There was a group of 20 men who came all the way from Minnesota. They came to support the cause and their friend in the group who just recently underwent brain surgery to remove a tumor. They were having so much fun and you could sense their support and love that they have for their friend. They all chipped in and donated another $7,500 to the fund. It is so touching to see people helping people.
Posted by Lisa Bluhm at 11:01 AM No comments:

Sunday night I helped the Chris Elliot Fund organization with their golf pairing party. I was invited by Tamara DePorter Mrs. Seattle. Names were drawn to pair up the golfers with their celebrity for their team. I got to meet several talented celebrities! Among them were Stephanie Zimbalist, Tom Parks & Nesby Glasgow. They were all very nice people who were glad to be able to help support the cause.
Posted by Lisa Bluhm at 10:57 AM No comments: 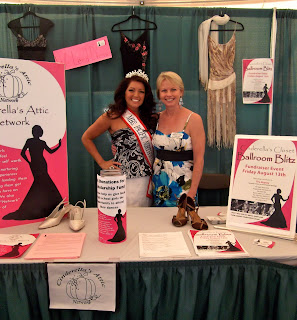 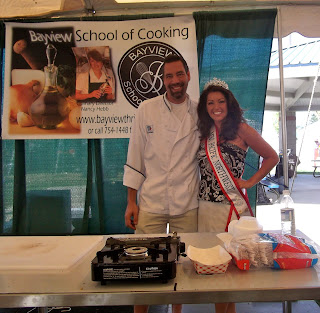 I spent Sunday Morning with Renata Hanson Founder of Cinderella's Closet at the Pacific Northwest Mushroom Festival. This is the 3rd year for this great community event. I helped Renata hand out information for the upcoming Ballroom Blitz Fundraiser and general information about the organization.
The Hawks Prairie Rotary is in charge of this event. The proceeds are donated to several organizations including Homeless Backpacks. There were lots of great demonstrations and mushroom's to be eaten! The guest chef presenting in our tent made this delicious creamy mushroom recipe with basil and garlic, it smelled and tasted so good! I was invited on stage to help hand out the samples to the audience.
Posted by Lisa Bluhm at 10:49 AM No comments: 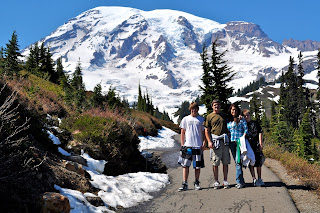 We took a trip overnight to Paradise at Mt. Rainier with my in-laws LeRoy and Bertha. It was our Christmas present to them this year. We had a great time. The weather was perfect!! There was still so much snow left that we could not do all the trails we wanted to at the top. We managed to find some great trails closer to the bottom. One was off the beaten path, our favorite kind to find, it had a beautiful waterfall.
It was really great to have no telephones, internet, or TV available. We had a great time as a family playing a rousing game of ticket to ride that I totally mastered much to my sons dismay. It was so exciting at the end we were actually standing up to play!
Posted by Lisa Bluhm at 5:41 PM No comments: 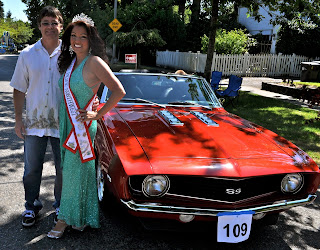 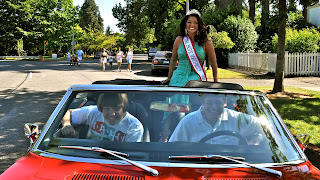 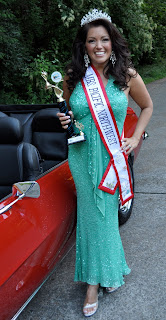 Lakefair is a huge part of my community. I have grown up watching the parade and participating in it over the years. It was great to be able to be in it again with my family. Our newly restored Camaro made it fun for my boys to participate. Being in a parade is very time consuming. You have to wait around for hours before you ever get on the parade path! It was a beautiful day and we were so fortunate to have a nice shady spot to wait it out in! Having been in the Moses Lake parade for the past couple of years I knew what to expect. We brought chairs and a picnic dinner to tide us over. We also had time to walk around and meet many other parade participants too.

Our family came to watch us and cheer us on. I realized how great it is that being in the pageant allows for events that bring my family together but the sad part is usually I don't get to hang out with them. Maybe after I win (wink wink) I can get one of my sisters to run for the title!!

I was very impressed with the volunteers and the quality of the parade. Everyone was friendly and helpful. There were so many people there, it was packed. Chairs are set out days in advance just to secure a spot! They had several PA announcers along the route announcing to the crowd each of the parade participants. TCTV was there with their film crew filming it live! It was fun to get emails from friends saying they saw us on TV! We won first place in our division which was non-motorized other! They presented us with a trophy at the start of the parade. We were surprised, I assumed it was for our awesome car but since it was non-motorized it must have been for Mrs. Pacific Northwest!! My husband was teasing me and said now he has a trophy wife!!!
Posted by Lisa Bluhm at 1:52 PM No comments: 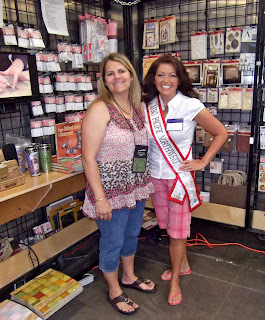 On Friday I went to the Scrapbook Expo at the Puyallup fairgrounds to demonstrate how to use the Simply Solder Art kit. I was invited by Judy owner of Scrapyard 329. Judy is a great example of someone who has "Unleashed their Potential" by using her passion to create beautiful things and applying it to a business that allows her to share that passion with others. Judy travels around the country setting up a store for the weekend along with other vendors. She sponsors classes and creates amazing samples to show people how to use the unique products she sells in her booth. We are honored to have her selling our products in her booth. Judy focuses on cutting edge products that keeps her customers excited and inspired to take their creativity to new levels.
Along with the Scrapyard 329 business Judy has another full time job when not traveling. She is a wife and the mother of two wonderful children. I enjoyed getting to know her better.
Posted by Lisa Bluhm at 1:42 PM No comments:

Please contact me with your "Unlocked Potential" story I would love to hear from you. All other inquiries welcome! Email Mrs. Pacific Northwest

Links to a few of my favorite things!